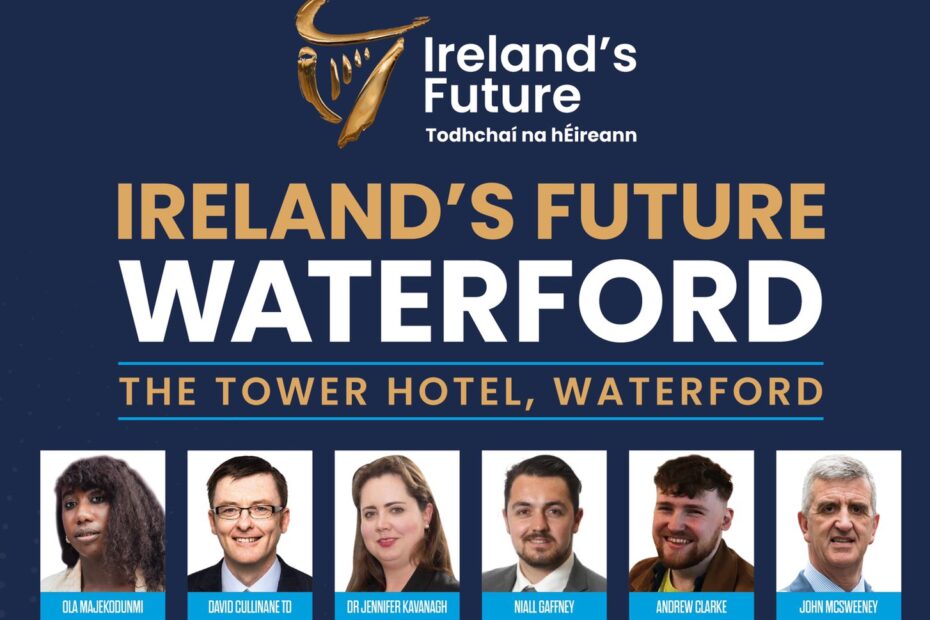 A public meeting will take place in The Tower Hotel, Waterford, on Thursday 28th April at 7pm, to discuss constitutional change and the ever-increasing likelihood of a border poll and Irish unity.

This is the eighth meeting in an all island series, organised by the pro-Irish unity civic group, Ireland’s Future, and follows well-attended meetings the group have previously organised in Cork, Galway, Dublin, Derry, Armagh, Limerick and Dundalk. Ireland’s Future has also hosted recent successful events in Philadelphia and New York and will soon announce details for a meeting to be held in London in mid May.

The Waterford meeting will be chaired by broadcaster and journalist Ola Majekodunmi and panelists taking part are President of Waterford Chamber of Commerce John McSweeney, Sinn Féin TD David Cullinane, President of Ógra Fianna Fáil Niall Gaffney, Dr Jennifer Kavanagh from Waterford IT and Andrew Clarke who is from a unionist background but now campaigns for a united Ireland.

“We are absolutely delighted to be bringing this conversation to Waterford. Like the previous panels, this panel is a diverse group and reflective of the new and united Ireland we want to see. One of equality, social justice and rights.

“Ireland’s Future wants to stimulate conversation about how our people are best served and our island is best governed in the coming time. We are organising public meetings the length and breadth of Ireland and beyond because we know the issue of referendums and constitutional change is coming and we want the people of Ireland to be involved in, and have ownership of, the conversation in advance of the referendum date being announced.

“We encourage people in Waterford to play a leading role in this conversation. We want to hear a broad range of voices, we want people, particularly our young, to have their say in how we build a new and united Ireland that cherishes all the children of the nation equally. Ireland’s Future is encouraging people to come along to the meeting in Waterford to listen and engage and be a part of the preparation and planning for a new, agreed and united Ireland.

The event will take place at 7PM on Thursday 28th April at The Tower Hotel, Waterford and will also be broadcast live on Ireland’s Future Facebook, Twitter and YouTube channel.

Everybody is welcome to attend.