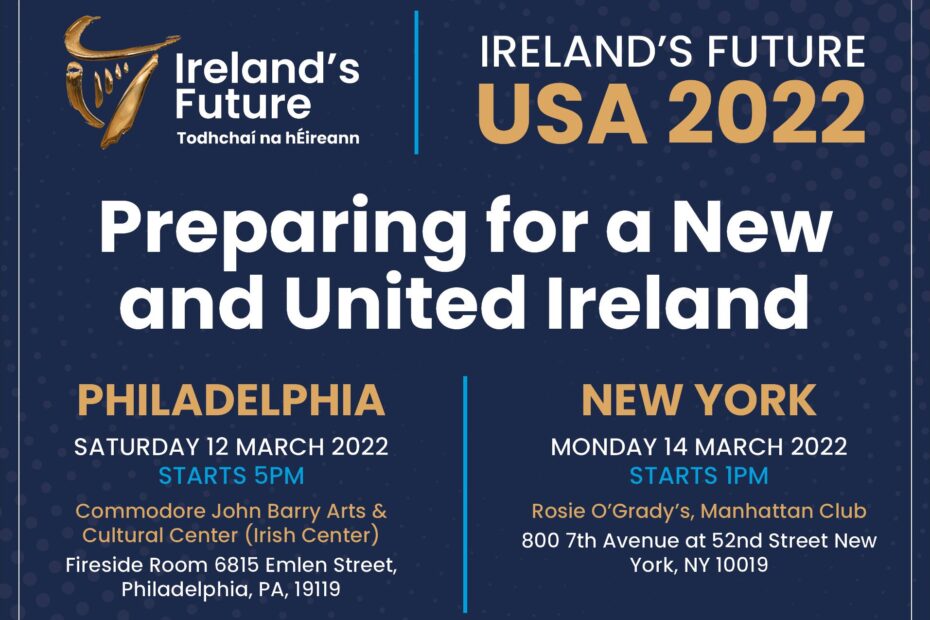 An “in person” panel discussion will take place this Saturday 12th March at 5PM in the Commodore John Barry Arts & Cultural Center, Philadelphia, to discuss constitutional change and the ever-increasing likelihood of a border poll and Irish unity.

This is the first meeting organised in the United States by the pro-Irish unity civic group, Ireland’s Future, and follows previous meetings the group have organised across Ireland in Belfast, Cork, Galway, Dublin, Armagh, Derry and Limerick.

Two days later on Monday 14th March at 1PM in The Manhattan Club, New York, a second event will take place. Joining Niall Murphy and Senator Frances Black will be Sinn Féin’s Mairéad Farrell TD, author and journalist, Susan McKay and the event will be chaired by former Judge of the Superior Court of the State of New Jersey, Hon. Francine A. Schott JSC (RET).

“We are absolutely delighted to be bringing this conversation to Philadelphia and New York. Like previous panels, these two represent a diverse group of people and are reflective of the new and united Ireland we want to see. One of equality, social justice and rights.

“Ireland’s Future wants to stimulate conversation about how our people are best served and our island is best governed in the coming time. We are organising public meetings in America because we know the issue of referendums and constitutional change is coming and we would like the Irish diaspora to be involved in the conversation in advance of the referendum date being announced.

“The benefits of Irish unity to people north and south and the economy in both jurisdictions is becoming very apparent. Much of the north has never been developed to its true economic potential and a new and united Ireland, will unleash that economic potential with the entire island economy growing and becoming much more productive. That will mean the island of Ireland developing a stronger, more robust economy with increased numbers of better jobs and higher standards of living for people in all thirty-two counties. In the event of a united Ireland, the north automatically re-enters the European Union. We believe the people should have their say on whether or not they’d like to live in a united Ireland, with the north back in the European Union.

“We encourage Irish America to play a leading role in this conversation. We want the Government to establish an all island Citizens’ Assembly to examine the constitutional future of the island. We want to acknowledge the role of the US in supporting the peace process. We now look once again to our good friends in the US to assist us on the next phase, as we get ready for constitutional change in Ireland. We know that this is a long-cherished objective of Irish people all around the world, we want to get this right. We are now entering the final stages of our journey. At long, long last a new and united Ireland is within reach.

Plese register here for the events: