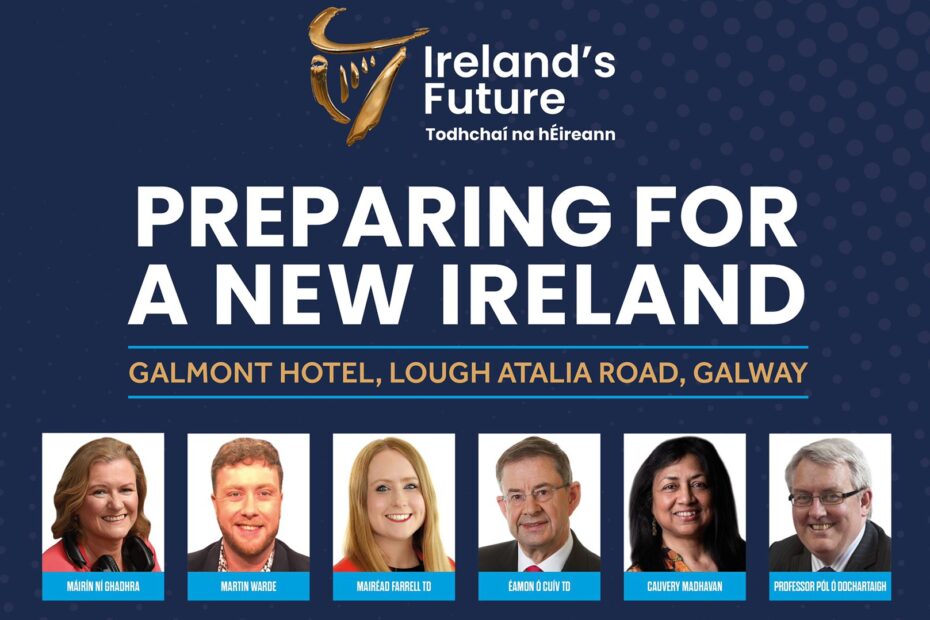 An “in person” panel discussion will take place in the Galmont Hotel, Galway, on Thursday 28th October at 7pm, to discuss constitutional change and the ever-increasing likelihood of a border poll and Irish unity.

This is the second meeting in an all island series, organised by the pro-Irish unity civic group, Ireland’s Future, and follows the well-attended meeting the group organised in Cork last month.

“We are absolutely delighted to be bringing this conversation to Galway. Like the previous panel in Cork, the Galway panel is a diverse group and reflective of the new and united Ireland we want to see. One of equality, social justice and rights.”

“Ireland’s Future wants to stimulate conversation about how our people are best served and our island is best governed in the coming time. We are organising public meetings the length and breadth of Ireland because we know the issue of referendums and constitutional change is coming and we want the people of Ireland to be involved in, and have ownership of, the conversation in advance of the referendum date being announced.”

“There is momentum building towards a unity referendum taking place in the not-too-distant future. Increasingly people are recognising that Irish unity is the outcome that holds most appeal and there is a growing demand for an in-depth conversation on where this all leads to.”

“Unionism in the north is now a minority and growing numbers of people across the island are asking the Irish Government to take the lead and prepare for a new, agreed and united Ireland.”

“The economic potential of a united Ireland is becoming very clear for all to see, particularly in the context of Brexit.”

“The benefits of Irish unity to people north and south and the economy in both jurisdictions is becoming very apparent. Much of the north has never been developed to its true economic potential and a united Ireland, will unleash that economic potential with the entire island economy growing and becoming much more productive. That will mean the entire island of Ireland developing a stronger, more robust economy with increased numbers of better jobs and higher standards of living for people in all thirty-two counties.”

“We encourage people in Galway to play a leading role in this conversation. We want to hear a broad range of voices, we want people, particularly our young, to have their say in how we build a new and united Ireland that cherishes all the children of the nation equally. Ireland’s Future is encouraging people to come along to the meeting in Galway to listen and engage and be a part of the preparation and planning for a new, agreed and united Ireland.”

The event will take place at 7PM on Thursday 28th October at the Galmont Hotel, Galway and will also be broadcast live on Ireland’s Future Facebook, Twitter and YouTube channel. Please register here for free tickets: