Home » News » Tickets for ‘Together We Can’ event released

Tickets for ‘Together We Can’ event released 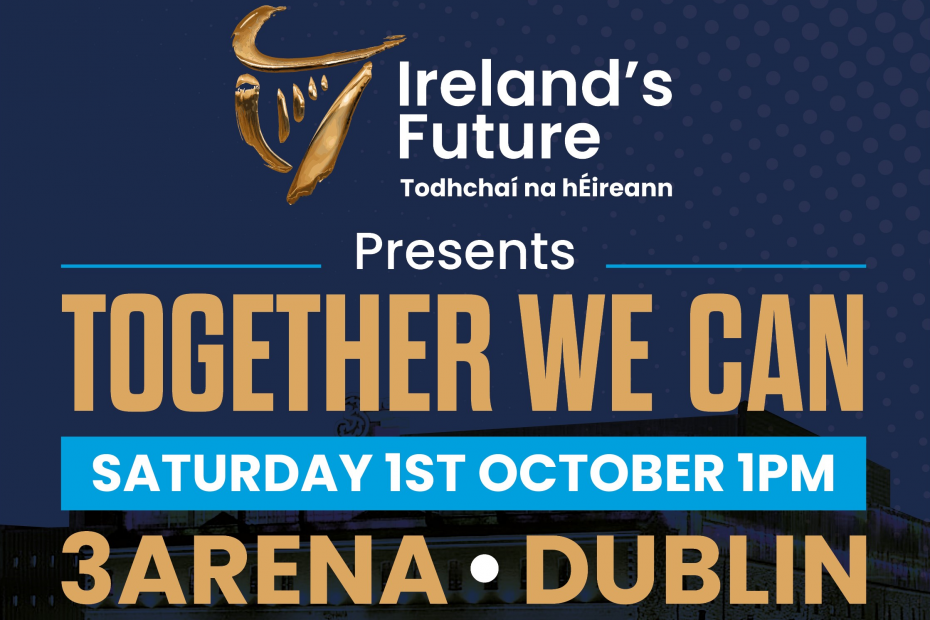 Tickets for the “biggest event” organised by Ireland’s Future so far, go on sale this morning.

The massive event titled “Together We Can” takes place on Saturday October 1 in the 3Arena in Dublin, a venue that has previously hosted gigs by Bob Dylan, Fleetwood Mac and Elton John.

Ireland’s Future chief executive Gerry Carlile said the venue is the largest the group has booked “by some distance” and will be a “special event”.

The group will also launch a 200-page “vision document” for the future of Ireland on October 1.

Mr Carlile stressed that the event was not a rally but a conference which aimed to include anyone with an interest in Irish unity and a new Ireland.

He said the group is in discussions with high profile speakers from the US and European Union, aswell as major figures from across Scotland, Wales and Ireland.

“We want to reach as far and wide as possible, into the Irish diaspora and also the EU,” he said.

“The majority of people in the north voted to stay in the EU and a united Ireland brings us back into the EU again.”

He said the conference aimed to be as inclusive as possible.

“We don’t want to put barriers in their way.

Mr Carlile said the event will be a “scaled up version” of the group’s conference in the Waterfront Hall in Belfast in January 2019 but with “elements of surprise”.

“The entire discourse has advanced and developed several years on from the Waterfront event,” he said.

“It’s very exciting. The feedback we are getting is truly phenomenal.”

He said, “these events are about building momentum ahead of October 1”.

He said the vision document will provide information about the process of holding a referendum and will cover issues including health, the economy and infrastructure.

Mr Carlile called for an all-Ireland citizens’ assembly to discuss constitutional issues ahead of any referendum.

“That will allow us to discuss each other’s visions for the future,” he said.

“You’ll have ordinary citizens from the length and breadth of Ireland, from Coleraine to Cork, joining in the one room.

“There should be a joined-up approach from the political world, civic society, trade unions, the business sector and the sporting world.

“The conversation about a referendum and potential constitutional change is now moving to the next level”.

Tickets for the 3Arena event “Together We Can” can be purchased at ticketmaster.ie from 9am on Wednesday July 13.